More beads for my string

On Saturday, we all mustered all our energy, weathered the heat, and packed ourselves into two cars to head for Kolmården. The trip by car is not far (probably like an hour and a half), but with three kids who are not used to travelling further than school, some breaks were needed. The kids were excited, I was apprehensive. How on earth would I have the energy to do this??? And not just the walking around, but the being around so many people, not having a comfortable place to sit, god - the fears were never-ending! 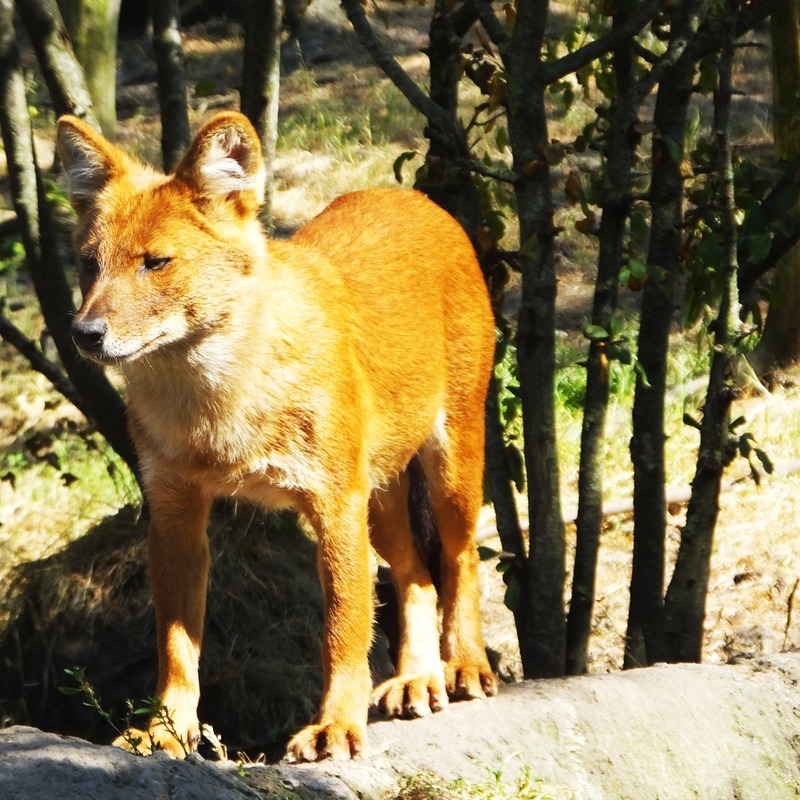 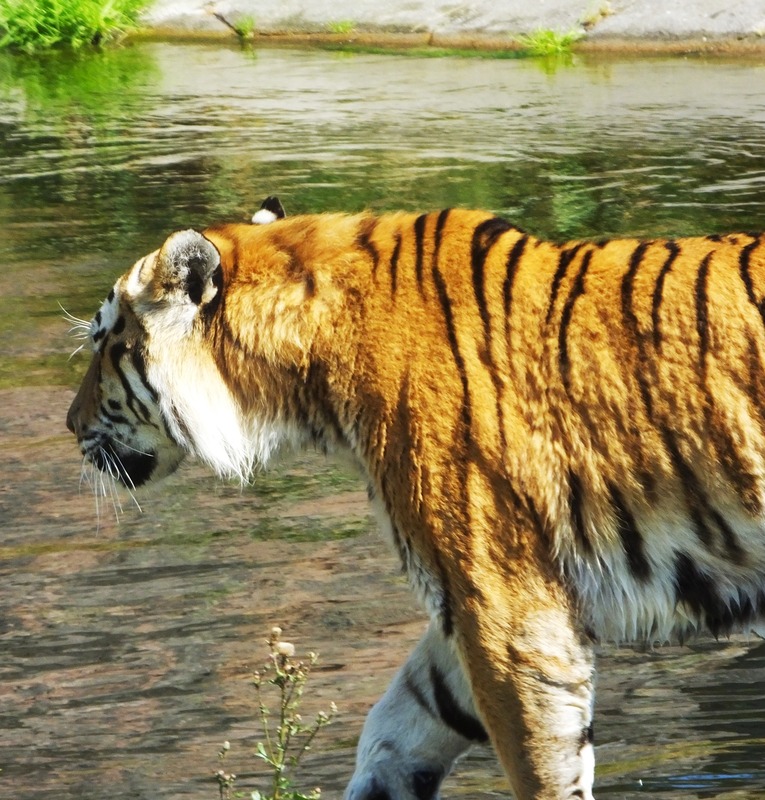 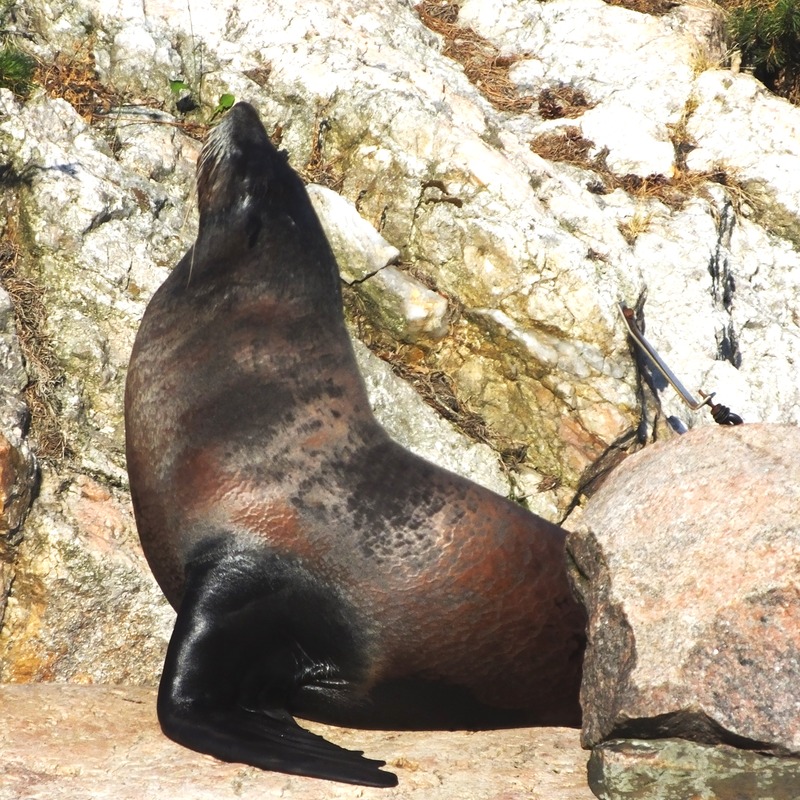 But we got through it, we saw all the animals, we rode in the funicular safari, and best of all - Jacob got to see the dolphins. He's been wishing to swim with dolphins for years, but has never actually seen them in real life. He was absolutely transfixed, watching as they swam and jumped and skidded across the water, laughing as they performed their tricks. It was magical to see! All of the kids loved the show (as inspite of myself, so did I. I normally have very strict opinions on animals being constricted to small spaces and learning tricks for the benefits of humans, but decided to put all those feelings aside for the day), loved seeing the animals and riding the little roller coaster shaped like a dolphin.

It was unbelievably hot, the kids were occasionally cranky, so was I to be perfectly honest. In the end, I was too tired to take another step, as I've got a slight tendency to overdo it (ok, I'll run myself down before I can accept defeat, if I'm being very honest about it). Still, it was a lovely day, I'm so happy to have done it! Next year, I hope to go back with them. Next year... It's hard to find the right balance between making plans for the future (as is so typically human), and accepting that the only thing we have is right now, and the future is uncertain. This is true for all of us, not just those of us adjusting to life with advanced cancers, but we seem to have such a hard time remembering it.

The past is gone, and the future is unwritten. It took  me a long time after the diagnosis to understand this. To understand that what I was grieving was something that had already happened, and something that had never really been there in the first place. I grieved the fact that I had breast cancer as though that was something that happened when I was told about it. But the truth is, it had been happening for years without my knowing it. And I grieved the future I had planned, as though I was entitled to it. Then I got my head around it, and realised that even if I was just finding out about it, I had already been living with cancer, perhaps for years. Just because it was new to me, didn't mean that it was new. It's sort of like being cheated on - you find out after it's already happened, it's new to you and it changes the way you look at the past, but it doesn't change the past. And just the same way, the future I was imagining, was not real. It never had been. I was grieving an idea.

And when the past is lost to you, and you understand that the future is unwritten and yours is not the only hand doing the writing, something changes inside you. Because all of a sudden, the only thing you truly have, is this moment. No matter how hard I fight, how determined I am to be a miracle patient, to be there for my boys, the only thing I can truly control, indeed the only thing that's actually real and not rewritten or made up of hopes and dreams, is the now. I wont make plans for the future - when it comes, if it comes, I will let it happen, grab life by the throat and make the most of it. I still plan on surviving, I still choose to remain unrealistically hopeful, but my main focus is on right now. I will enjoy the right now, I will squeeze as much as I can get from it, and when it becomes the past, I will cherish the good memories and let go of the rest.

Right now, I'm sitting on my comfy chair on my beloved balcony, enjoying the breeze and the fact that it's not suffocatingly hot anymore, the kids tucked up in the sofa just inside, watching Tinkerbell, tired after a day by the pool. In a moment, I'll go in and join them, squeeze myself in next to them and cuddle them and smell their necks. And I'll enjoy the hell out of that moment as well. And what I've learned is that it's worth it to keep challenging yourself, t do things that scare you, even though you worry how your going to get through them, because you'll have a wonderful time doing it, and then you get that precious memory to keep. And if it all goes poop shaped, it will soon be in the past, and you can choose not to dwell on it! 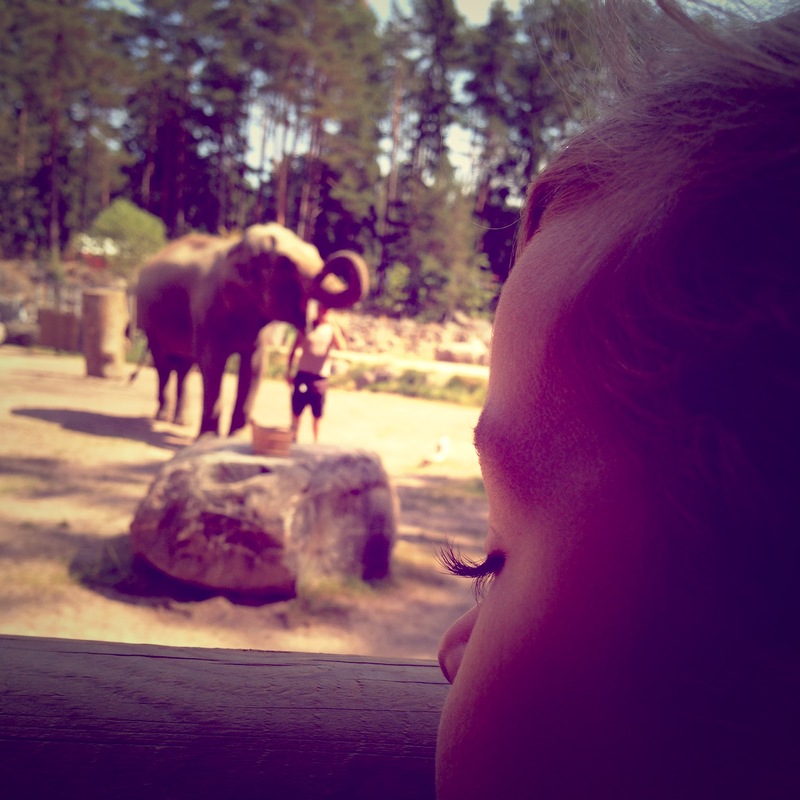 Milo inspecting the elephants. The baby one was cute, but the others a bit scary! 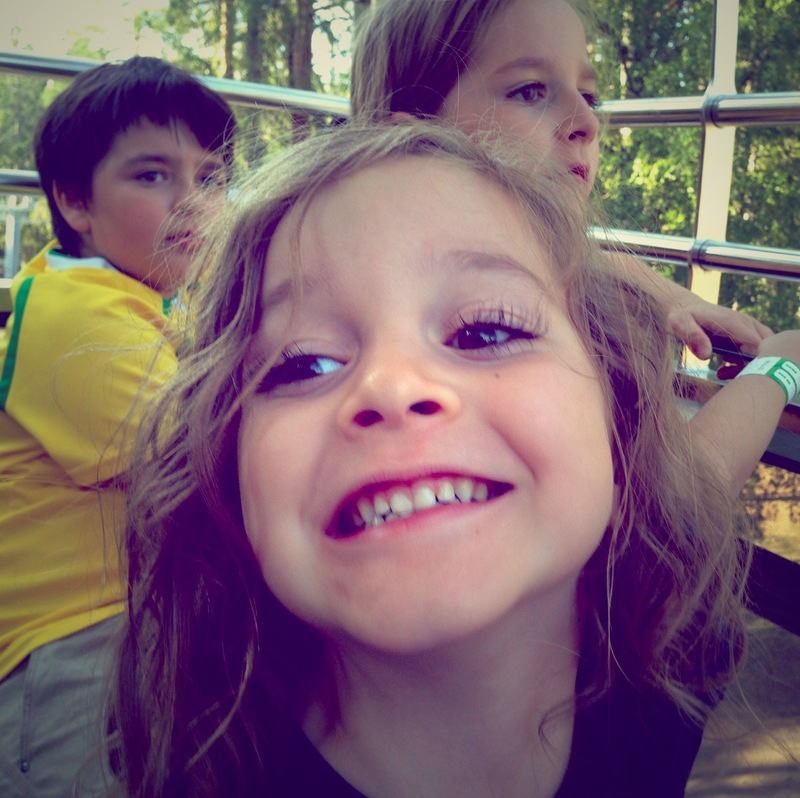 On the Safari tour high up in the trees! 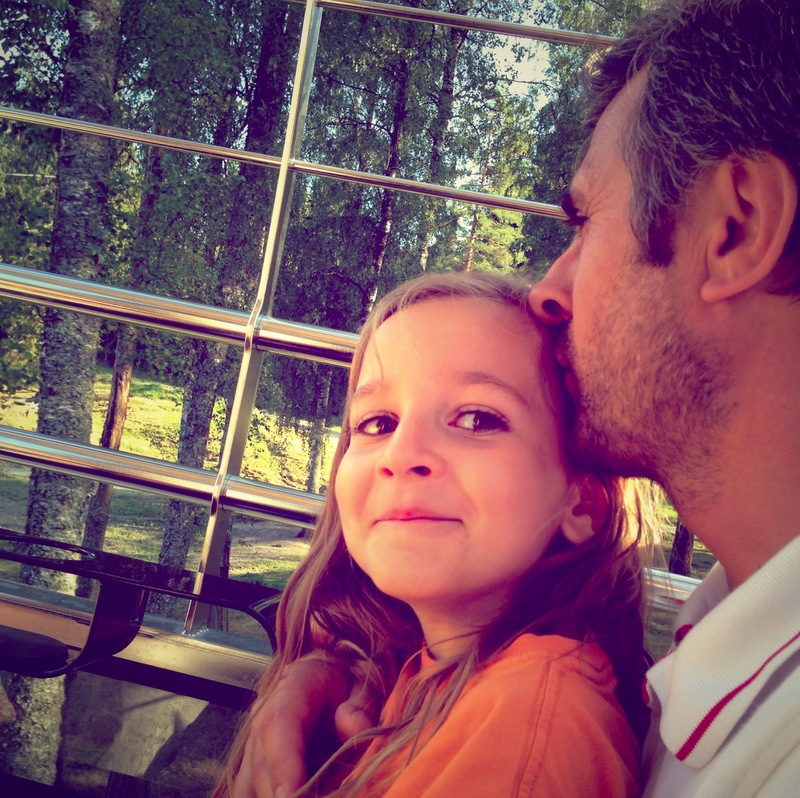 At times, it was a long way down, and sitting on the lap felt safer. 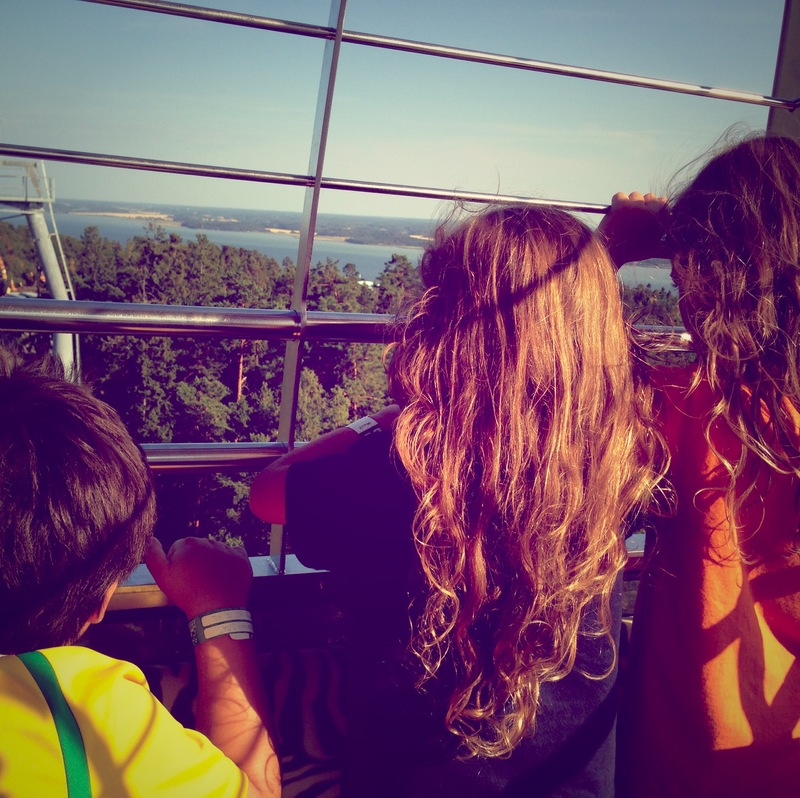 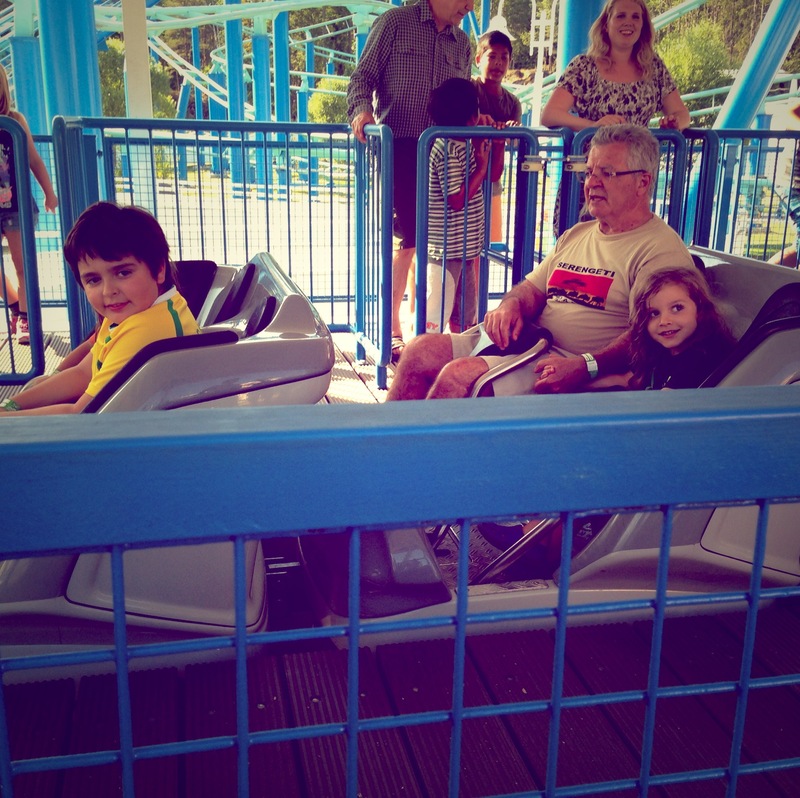 On the roller coaster for the second time - this time their grandfather got to take them, as my legs and my tummy were not up for another ride...

Tack. Tänkvärt. All kärlek till dig.